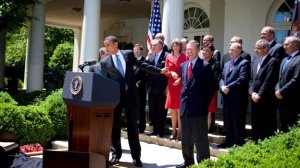 Washington, DC.- It’s been one of the Obama’s breakthroughs since he took oath. Automobile executives and activists were the backdrop at the White House gardens when president Obama announced the nationwide automobile mileage and emissions standards, a huge step forward in the effort to limit greenhouse gases and reduce America’s dependence on foreign oil.

The ambitious plan will increase fuel-efficiency standards from now to 2016, reduce tail-pipe greenhouse gas emissions from cars and light trucks, and, overall, will reduce greenhouse emissions by nearly one-third.

The Bush administration was never capable of taking on a similar or realistic agreement, and Obama’s plan probably seems likely to go through mainly for the reason that the plan had previously been agreed upon and accepted by the automobile industry, unions, and politicians from both sides.

This approach is an example for large polluting nations to follow. China, India, or Russia, for example, are countries that roughly speaking, have always looked for excuses to avoid making any deep commitment to protect the environment through green laws for regulating their industries.

With this message Obama has proven that his New Foundation for the U.S. is the real deal and he continues working on two other big targets: heath and education. They are difficult issues, but not impossible, as his record shows this week.